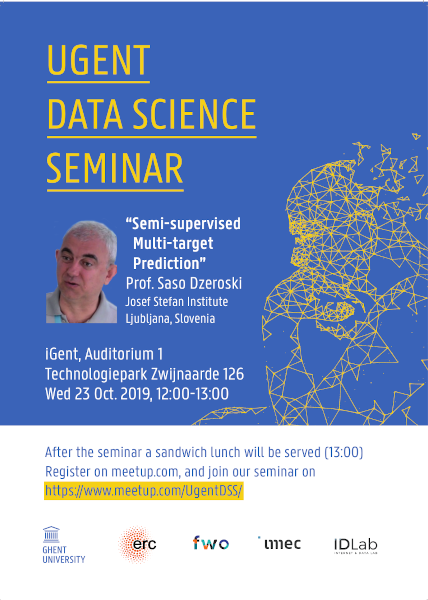 Predictive modeling, also called supervised learning, and clustering, also called unsupervised learning, are two major paradigms within machine learning. In predictive modeling, the task is to learn a model that predicts the value of a target/ output variable from the values of independent/ input variables: Given is a set of instances in the form of (example,label) pairs, where example denotes the values of inputs and label the output. In clustering, no variable is designated as dependent and there are hence no labels: The task is to find groups of examples, similar within groups and dissimilar accross groups. In multi-target prediction, more than one target variable has to be predicted. The classical tasks of classification and regression are special cases of multi-target classification and regression. There are also hierarchical versions of these tasks, where the target variables are structured in a hierarchy, such as hierarchical multi-label classification and hierarchical multi-target regression. An additional complexity arises when some of the training instances have no labels, but still need to be taken into account during the learning of predictive models: This task is known as semi-supervised learning. The paradigm of predictive clustering unifies the two major paradigms of predictive modeling and clustering, i.e., supervised and unsupervised learning. It has been successfully applied to solve different tasks of multi-target prediction. In this talk, I will present methods for semi-supervised learning, based on predictive clustering, that can handle both single-target and multi-target prediction problems. I will also present the results of their extensive empirical evaluation, showing that the use of unlabeled data can help to learn both more accurate and simpler (more understandable) models.

Sašo Džeroski is a scientific councillor at the Jozef Stefan Institute (Ljubljana, Slovenia) and a full professor at the Jozef Stefan International Postgraduate School. He is also a visiting professor at the European Space Agency (Frascati, Italy). His research group investigates machine learning and data mining (including structured output prediction and automated modeling of dynamic systems) and their applications (in environmental sciences, incl. ecology/ecological modelling, and life sciences, incl. systems biology/systems medicine).

He has participated in many international research projects and has coordinated three of them in the past. Most recently, he lead the FET Open XTrack project MAESTRA (Learning from Massive, Incompletely annotated, and Structured Data). He has been scientific and/or organizational chair of numerous international conferences, including ECML PKDD 2017, ICML 2005 and 1999, DS 2019 and 2014, MLSB 2010 and 2009, and ILP 1999 and 1997.

Sašo Džeroski is currently the chair of the Slovenian Artificial Intelligence Society. He became a fellow of EurAI, the European Association of Artificial Intelligence (formerly ECCAI) in 2008, in recognition for his “Pioneering Work in the field of AI and Outstanding Service for the European AI community”. In 2015, he was elected a foreign member of the Macedonian Academy of Sciences and Arts and in 2016 a member of Academia Europea (European Academy of Humanities, Letters and Sciences).

Sandwiches will be served after the seminar for registered participants.