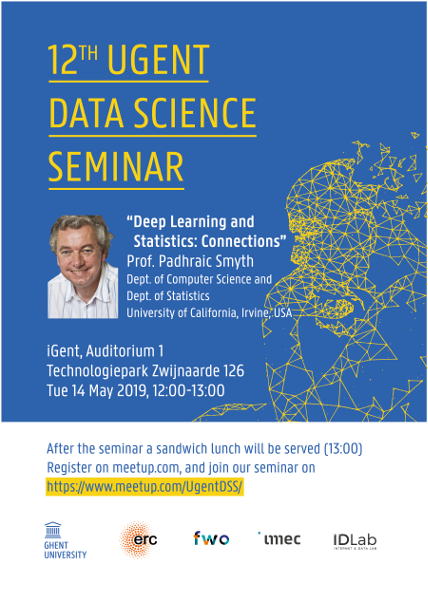 Deep learning techniques have received widespread attention in recent years for their impressive performance across a range of prediction problems in areas such as computer vision, machine translation, and speech processing. Much of this work has occurred outside of statistics - yet, several of the key ideas underlying deep learning have statistical foundations. In this talk we will explore several connections between the two fields, discussing how some of the key concepts in deep learning are related to traditional ideas in statistical modeling and estimation, covering topics such as model representation, regularization and generalization, and model calibration. We will also highlight key differences, both technically and culturally, in terms of how data analysis problems are approached by researchers in both fields.

Padhraic Smyth is a Chancellor’s Professor in the Department of Computer Science at UC Irvine, with joint appointments in the Department of Statistics and in the Department of Education. His research interests include machine learning, artificial inteligence, pattern recognition, and applied statistics and he has published over 180 papers on these topics. He is an ACM Fellow (2013), a AAAI Fellow (2010), and a recipient of the ACM SIGKDD Innovation Award (2009). He is co-author of the text Modeling the Internet and the Web: Probabilistic Methods and Algorithms (with Pierre Baldi and Paolo Frasconi in 2003) and Principles of Data Mining, MIT Press (with David Hand and Heikki Mannila in 2001), and he served as program chair of the ACM SIGKDD 2011 conference and the UAI 2013 conference. He was the founding director of the UCI Center for Machine Learning and Intelligent Systems from 2007 to 2014 and founding director from 2014 to 2018 of the UCI Data Science Initiative.

Padhraic has served in editorial and advisory positions for journals such as the Journal of Machine Learning Research, the Journal of the American Statistical Association, and the IEEE Transactions on Knowledge and Data Engineering. While at UC Irvine he has received research funding from agencies such as NSF, NIH, IARPA, NASA, NIST, and DOE, and from companies such as Google, eBay, Adobe, IBM, Microsoft, SAP, Xerox, and Experian. In addition to his academic research he is also active in industry consulting, working with companies such as eBay, Toshiba, Samsung, Oracle, Nokia, and AT&T, as well as serving as scientific advisor to local startups in Orange County. He also served as an academic advisor to Netflix for the Netflix prize competition from 2006 to 2009.

Padhraic received a first class honors degree in Electronic Engineering from National University of Ireland (Galway) in 1984, and the MSEE and PhD degrees (in 1985 and 1988 respectively) in Electrical Engineering from the California Institute of Technology. From 1988 to 1996 he was a Technical Group Leader at the Jet Propulsion Laboratory, Pasadena, and has been on the faculty at UC Irvine since 1996.

A sandwich lunch will be served after the seminar for registered participants.