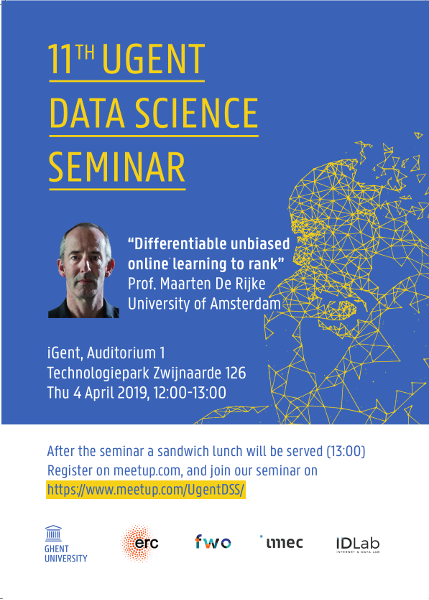 Online Learning to Rank (OLTR) methods optimize rankers based on user interactions. State-of-the-art OLTR methods are built specifically for linear models. Their approaches do not extend well to non-linear models such as neural networks. We introduce an entirely novel approach to OLTR that constructs a weighted differentiable pairwise loss after each interaction: Pairwise Differentiable Gradient Descent (PDGD). PDGD breaks away from the traditional approach that relies on interleaving or multileaving and extensive sampling of models to estimate gradients. Instead, its gradient is based on inferring preferences between document pairs from user clicks and can optimize any differentiable model. We prove that the gradient of PDGD is unbiased w.r.t. user document pair preferences. Our experiments on the largest publicly available Learning to Rank (LTR) datasets show considerable and significant improvements under all levels of interaction noise. PDGD outperforms existing OLTR methods both in terms of learning speed as well as final convergence. Furthermore, unlike previous OLTR methods, PDGD also allows for non-linear models to be optimized effectively. Our results show that using a neural network leads to even better performance at convergence than a linear model. In summary, PDGD is an efficient and unbiased OLTR approach that provides a better user experience than previously possible.

Maarten de Rijke studied philosophy (MSc 1989) and mathematics (MSc 1990) and wrote a PhD thesis, defended in 1993, on extended modal logics, under the supervision of Johan van Benthem. He worked as a postdoc at the Centrum Wiskunde & Informatica, before becoming a Warwick Research Fellow at the University of Warwick. He joined the University of Amsterdam in 1998, and was appointed professor of Information Processing and Internet at the Informatics Institute of the University of Amsterdam in 2004. He leads the Information and Language Processing group at the University of Amsterdam, the Intelligent Systems Lab Amsterdam and the Center for Creation, Content and Technology. During the first ten years of his scientific career Maarten de Rijke worked on formal and applied aspects of modal logic. At the start of the 21st century, his research focus shifted to information retrieval. He has since worked on XML retrieval, question answering, expert finding and social media analysis. De Rijke was elected a member of the Royal Netherlands Academy of Arts and Sciences in 2017. He was awarded the Tony Kent Strix award in 2017. His work is supported by grants from the Nederlandse Organisatie voor Wetenschappelijk Onderzoek (NWO), public-private partnerships, and the European Commission (under the Sixth and Seventh Framework programmes).