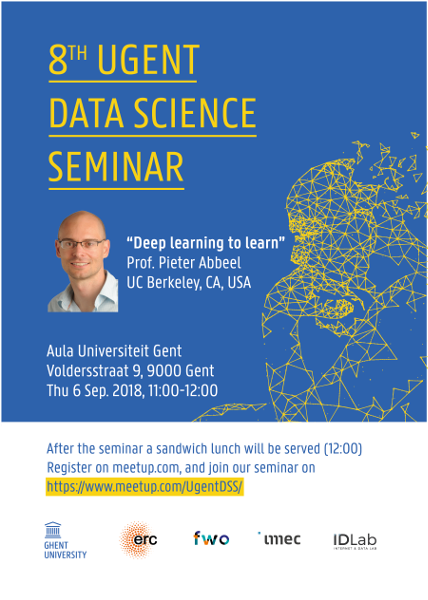 Reinforcement learning and imitation learning have seen success in many domains, including autonomous helicopter flight, Atari, simulated locomotion, Go, robotic manipulation. However, sample complexity of these methods remains very high. In contrast, humans can pick up new skills far more quickly. To do so, humans might rely on a better learning algorithm or on a better prior (potentially learned from past experience), and likely on both. In this talk I will describe some recent work on meta-learning for action, where agents learn the imitation/reinforcement learning algorithms and learn the prior. This has enabled acquiring new skills from just a single demonstration or just a few trials. While designed for imitation and RL, our work is more generally applicable and also advanced the state of the art in standard few-shot classification benchmarks such as omniglot and mini-imagenet.

After the seminar a sandwich lunch will be served. If you wish to take part in this, registration is required.

This seminar is supported by imec, and by the WOG “Guiding networked societies, linking data science and modelling”.