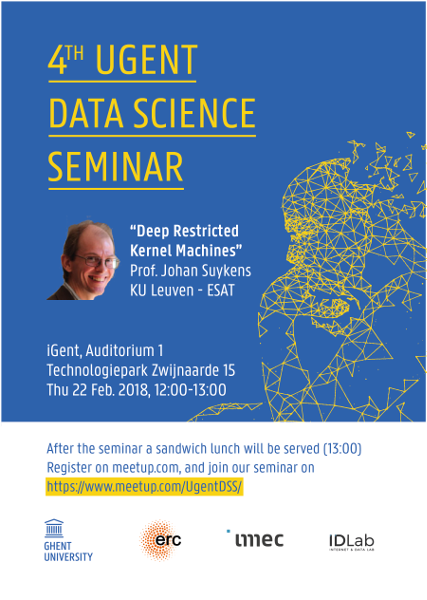 Johan A.K. Suykens was born in Willebroek Belgium, May 18 1966. He received the master degree in Electro-Mechanical Engineering and the PhD degree in Applied Sciences from the Katholieke Universiteit Leuven, in 1989 and 1995, respectively. In 1996 he has been a Visiting Postdoctoral Researcher at the University of California, Berkeley. He has been a Postdoctoral Researcher with the Fund for Scientific Research FWO Flanders and is currently a full Professor with KU Leuven. He is author of the books “Artificial Neural Networks for Modelling and Control of Non-linear Systems” (Kluwer Academic Publishers) and “Least Squares Support Vector Machines” (World Scientific), co-author of the book “Cellular Neural Networks, Multi-Scroll Chaos and Synchronization” (World Scientific) and editor of the books “Nonlinear Modeling: Advanced Black-Box Techniques” (Kluwer Academic Publishers), “Advances in Learning Theory: Methods, Models and Applications” (IOS Press) and “Regularization, Optimization, Kernels, and Support Vector Machines” (Chapman & Hall/CRC). In 1998 he organized an International Workshop on Nonlinear Modelling with Time-series Prediction Competition. He has served as associate editor for the IEEE Transactions on Circuits and Systems (1997-1999 and 2004-2007), the IEEE Transactions on Neural Networks (1998-2009) and the IEEE Transactions on Neural Networks and Learning Systems (from 2017). He received an IEEE Signal Processing Society 1999 Best Paper Award and several Best Paper Awards at International Conferences. He is a recipient of the International Neural Networks Society INNS 2000 Young Investigator Award for significant contributions in the field of neural networks. He has served as a Director and Organizer of the NATO Advanced Study Institute on Learning Theory and Practice (Leuven 2002), as a program co-chair for the International Joint Conference on Neural Networks 2004 and the International Symposium on Nonlinear Theory and its Applications 2005, as an organizer of the International Symposium on Synchronization in Complex Networks 2007, a co-organizer of the NIPS 2010 workshop on Tensors, Kernels and Machine Learning, and chair of ROKS 2013. He has been awarded an ERC Advanced Grant 2011 and 2017, and has been elevated IEEE Fellow 2015 for developing least squares support vector machines.

From 13:00 a sandwich lunch will be served for registered participants to continue discussions.